Portraits of the followers of Jesus
https://new-birth.net/conversations-with-judas-of-kerioth/portraits-apostles/ 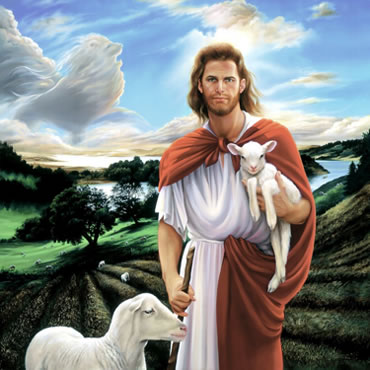 The Lamb and the Lion

There is a spiritual dimension within each of my paintings, although it was not until the fall of 1991 that I ever considered the possibility of designating an exclusive spiritual purpose to any of my works. Essentially, I was a secular painter, well established with a successful profile in the contemporary art world. Through a series of serendipitous events, however, the direction of my life was changing, and as a result of powerful spiritual infusions and influences it was becoming necessary to confront a mandate from higher guidance.

I was being asked to paint a portrait of Jesus Christ. This was a most unlikely project for me, and my reasons for feeling that way were outlined with great logic. After careful deliberation of the issues connected with such a project, I made a counter-mandate: “If He shows up, I'll be privileged to paint Him.” Such a calling — in dialogue with such an attitude — facilitated a profound evolution of character as well as invoking the presence of Sacred Phenomena.

On November 23, 1991 I sat quivering with frustration… like a wild horse in a box canyon, full of vigor and no place to go. All I could do was pray. I pleaded to be shown how to paint Him or else to have this commission taken from me. At that moment, a presence entered the room unlike any I've ever experienced. He stood at a distance from me in His own space. Although He was transparent, there was a radiant glow, and He displaced the air so conspicuously that I could see currents of pressure waves rippling about eight feet in front of me. Was it the Holy Spirit… or perhaps an angel? At that time, I had no reference points from which to discern, but later experiences and insights were to reveal that it was the Master, Himself, in pure spiritual form. The Presence called my name, though in no human words I know, and then shot a beam of energy from Himself to a point between my eyes. I presume He implanted something into my optic nerve, for a radiant picture projected before my eyes. It was the exact visual prototype of the painting to be done. Every detail was there, and it was available for reference from that moment until the painting's completion. That was the source of the final image you see in the painting. No human subject was ever used.

As the days passed, our experience of being together was like that of friends. And His presence became increasingly real. The events of each day unfolded perfectly, as they should, and each hour of work was a living dialogue with the Master. We spoke of many things, large and small. The experience was both peaceful and dynamic, with every moment bringing a special fulfillment. The painting was finished on March 12, 1992, but the story of its miracles was just beginning. As prints of the painting spread around the world, letters and calls came in daily bringing stories of its blessing to the lives of others and the miracles that followed in its pathway. There is no order of importance in the realm of miracles. Nevertheless, an event of extraordinary scope and importance occurred on July 19th and 20th of 1992 which would highlight, with stellar brilliance, the miraculous nature of the Master's portrayal.

The painting was being installed for exhibition on Sunday morning at St. Francis of Assisi Episcopal Church in Willow Park, Texas. Without warning, the main flood light fell and crashed into the painting. It hit on the left side, just between the divided trunk of the oak tree. Those of us who saw it happen screamed in terror and practically hit the floor in an effort to avert the damage. As I beheld the fallen painting, its damage glared at me. There was a four-inch dent with a one-inch incision in the center of it. There was a complete tear in the canvas through which I projected my little finger. I was so shaken it was difficult to continue with the program, although I persisted in honor of the greater purpose for being there. When the day was over, the painting was gently placed in its case and taken home. I couldn't bear to look at it any further that night, so I went to sleep and postponed the final evaluation. The next morning I reluctantly removed the painting from its case. To my amazement, there was no cut! Then I looked at the back and observed that the canvas weave was as tight and perfect as the day it was stretched. The emotions I felt–from disbelief to exaltation–would fill a book! Only Father Hermann of the church was not surprised. He and others have now filed written testimony to the fact of the painting's injury and subsequent healing. This is good! For to look at the painting today one would find no trace of damage remaining. Truly, July 20th was a joyous day of Divine revelation, that in the Master's hands all things are made whole!

Her story checks out. She never painted anything comparable before or since.

Wow this is the true face of Jesus!!
I feel its power, peace and joy.
I must spread this abroad.

fits with Shroud of Turin, confirmed by the Farsight Institute.
Powerful corroboration of Padgettite message.
[2022-03-20 Sun 15:55]

He is of a commanding figure, as you say on earth. His features are regular, and his eyes are of a deep blue, almost a purple blue, with such depths of love in them that under its influence you almost forget to note the color of his eyes. The hair is a beautiful brown, worn long and parted in the middle so that it falls over his shoulders. His nose is straight and somewhat long, with nostrils very refined and showing the artistic elements in his nature. His other features are in keeping with those I have described. He wears a beard quite long and very silky and brown like his hair.

And while Jesus was a Jew, he was not what may be called a typical Jew in appearance any more than in other qualities, for he had in him that condition of soul that to a large extent determined and fashioned his appearance. His eyes were not dark or brown but a violet blue, and his hair was light and inclined to the auburn; his nose was prominent and somewhat long, and his beard was of the color of his hair, and worn not so long as was the custom of those days, and he never had a razor on his face. His forehead was not so very high or broad, but was well shaped and somewhat effeminate, and indicated that there was not so great mental development as might be supposed, for I must say here, that his knowledge was not so much the knowledge of the brain as of the heart and soul; and as you know, and as all men may know who acquire the proper soul development, the soul has a brain (mind) of its own which is used for the disclosure of the knowledge of that which pertains to the spiritual truths. Mortals may not quite comprehend the meaning of this assertion, but I must tell them that in certain circumstances and conditions the brain, or, to be more exact, the mind of the natural man becomes entirely absorbed in the mind of the soul.

So that, I say, it is not a correct conclusion to suppose that Jesus, because of having all the wonderful knowledge of the truths of God - his Father, as he preferred to call God - must have had a large development of those portions of the brain that is ordinarily displayed by a large or prominent forehead. His head, in fact, was not very large, but compact and beautifully shaped. He wore his hair parted in the middle and reaching to his shoulders, and it was somewhat curly - a beautiful head of hair which seemed to be full of life. No artist has had a correct conception of his appearance and no portrait or sculpture conveys a near likeness of him.

Physiognomic realtalk mixed with paranormal disclosure. I love it!

many souls who are gifted in the psychic abilities are easily misled and misguided. For in their eagerness to make a connection with me and to hear my words and to be guided by my presence this often leads to many unfortunate interactions with lower spirits who are all too happy to pose as if they were me, but are not.

This dear soul believes that my original appearance was that of a short man with a hunched back, ugly and without grace. I say to you as you well know, that my stature was tall and straight, that my appearance was not unpleasant to look upon, and I was taller than most. This is because my father was a tall man and as for my mother, her face was very pleasant to look upon. I thereby inherited many of these traits and walked the earth with a measure of beauty and grace. Indeed my eyes were blue, my hair was auburn.1 Many were drawn to me because of my physical appearance. I had the stature of a leader. I utilized these gifts given to me by the Heavenly Father to impress upon those who were curious as to my teachings.