As they chastise Yajweh, interstellar anthropologist and leader of their 9-man mission to uplift humanity over the last 3,600 years:

From the hallowed halls of (phonetically translated as) Una-QuWan this message carries the approval and seal of the 7th Emperor of Nibiru, whose names cannot be written, addressing Yajweh (of the Anunnaki) as you have asked to be heard and answered.

Yajweh, your age is showing in these trying times. Your compassion was a concern, also for Yeshua, who was the 9th, and addressed in councils above your pervue before you left for Delta Sol those (years) days that are now past into the record. You, who was chosen among all from (Yajweh's planet, again as phonetically close as I can get it) Ibania. You, Yajweh who is now, proudly, called by his highest name, Yajweh of the Anunnaki, have failed to remain impartial.

You have failed to contact us for (this is about 200 Earth years) as many days as moons come passing and now you come, your humility dimmed by your time with the (Humans… us!!) Jah-Ku and you do not ask with respect but try to convince those who can read the record at any time and know more than you can ever even glimpse.

You ask now for change that you know we cannot influence. The (people here call them "greys" - the generic 'aliens') Dai-zohn-ahl have made no secret those Jah-Ku they wish to (translation is… maybe "confiscate"? take forcefully) $^&% and you, of all the nine, know the Dai-zohn-ahl can not be reasoned with.

Oh, Yajweh of the Anunnaki, who brought honor to the Empire when you brought peace in No-Dox-Quai. You think in terms not suited to your station. Your mouthpiece Vince DelGato (woo hoo!) knows much about things that should not pass before the (ears/eyes/senses) Hi-ahl of men. But the time is at hand and your logic is sound and well spoken.

You say you can avert the great war that is coming to the people of Earth/Delta Sol. The ones they call Netanyahu and Ahmadinejad thirst for this war. The Jah-Ku Obama cannot keep their paths from crossing before Jupiter's well of dark matter brings alignment and we arrive. The one they call Putin is their (Christian equivalent of antichrist) Yeshua Denall.

Still, the council I have received uniformly trusts your judgment and will grant you these (two earth years) times within the passings. You may chose one of the remaining nine to assist you and we shall see it is done. But be not blind to the stewardship you invest in this cause, oh Yajweh of the Anunnaki, whose gift has always been, given by the ancient ones within the walls of Lu-Pon-Ro, to see and seek balance in all things.

So say this, the 7th Emperor of Nibiru, whose names cannot be written, addressing Yajweh (of the Anunnaki) as you have asked to be heard and answered. (the closing refers to an ancient diety-type figure, whose name is always written like a small cross - + - like a plus-sign, not a Christian Cross)

(Oh now come and listen) Yajweh of the Annunaki - and your mouthpiece, Vince DelGato, who is not one of us but a human who can never fully understand -

Why do you speak of sacred things on this archaic technology? Youtube is not the place to discuss things of a sacred nature, and you, Yajweh of the Annunaki, know this above all others, because you commanded we come and you commanded that we return.

Now it appears you may be having (second thoughts, reservations) about the outcome of that which you commanded those years ago – when you said the people of Earth could not be (changed, saved) and you said they must start (again, begin again/anew) as you did before the time of the great flood.

Your giving the sacred knowledge to those musicians (cannot translate this - he basically says 5SKS's music sucks) and think of yourself as clever – oh Yajweh of the Annunaki it is not too late to return and rule from your throne, but time is running out. We are about to begin a time where it will not be possible for you to return.

On (this would be a date, 8 November, 2010) I will arrive to (accept/receive) your answer - (then he says something akin to "have a good day" and that is it)

Could the above be in the voice of the 7th Emperor himself, chastising the friend he personally commissioned? 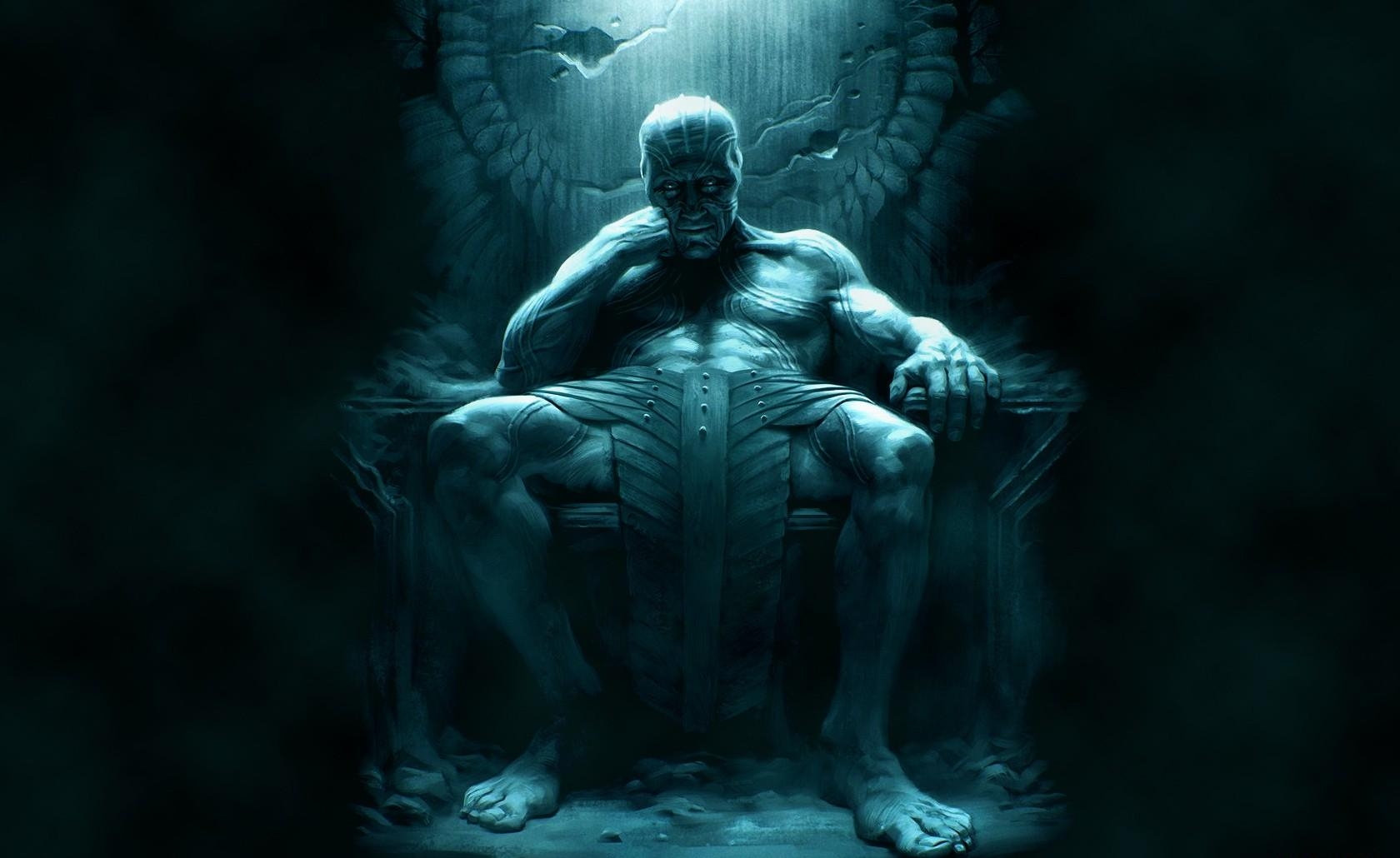 "The Sasquatch Message to Humanity_ Conversations with Elder Kamooh":

The Bird-People's kings who seceded from the Star Council to join with the Archon lower lords are known as the Anunnaki, Sky People fallen, or Rakshasa. From Watchers or Hakamim, they became Fallen Ones or Nephilim. They were exiled from Earth by the Star Council and went to live on their artificial planet Nibiru, abode of the gods. Their huge space craft travels all around the solar system and returns to its core over millenia. It has shielding systems and magnetic screens to make it invisible.

The Anunnaki have kept coming to Earth over the ages, even into Human times, when they were often worshipped like gods, with the imposition of cults, through fear or force. They are those gods who demanded bloodshed and Human sacrifice, required gold, taught to cast spells, lead masses into wars. They later established their dynasties over your people, putting their hybrid bloodlines as your rulers.

Another mean to accomplish a long term planetary enslavement is by gradually modifying genetic codes through manipulation to suit the control agenda of the invaders. Implantation of hybridized lineages to infiltrate Humanity and rule over it, is an example. This was done more than once since the downfall of Atlantis, when the Anunnakis and the Rakshasas implanted their reptilian hybrid bloodlines in Egypt, Sumeria, India, China, Japan, Mexico and elsewhere, showing themselves as gods requiring Human sacrifices.

The Anunnakis or 'Sky-People-on-Earth', were originally ancient Bird-People twice your size, generally described as blue giants. Over millions of years, they evolved into cyborgs and left Earth as ordered by the Star Elders Council, to live on their artificial planet Nibiru. Ancient Sumerian texts mention an orbiting cycle of three-thousand-six-hundred years, but this is only what was originally prescribed and agreed upon in their mission to watch over the solar system. They have since operated their planet-size ship along an irregular, unpredictable course, as it pleases their domination agenda. They later hybridized with reptilians like the Rakshasas, inheriting much of their characteristics, like shape-shifting. Both are represented in countless ancient depictions and described in endless accounts. They have kept ruling your institutions and governments through an elite put in place and in charge by a covert network of secret occult orders, infiltrated in all parts of societies.

While I want to express who I am and where it is that I come from, I feel that our information is what is most important to share this day. In short, I am what your people call a Goddess, but I am not. I am the Mother of the Anunnaki, for they are my wayward children and many stories have been put in place to demonize me. How can I be a demon if I am working with you now? Your Guardians have taught you to not judge as you poor children do not have the entire story. It is not so much that myself and consort Abzu FreshWater were destroyed or killed, we were actually driven off. Because we worked within the element of your Earth Waters, we became enlightened to the energy of your planet and we were the ones who first began to try to reason with the Earth Lords at that time, they are my children but we also do not have so much emotion when it comes to each other like family.